Originally from San Diego, Carstens made his first trip to Telluride in 1980 and fell in love with its beauty. In 1986, he purchased his first piece of property, the Sound of Music Ranch on Wilson Mesa. In the following years, he moved to Telluride and bought several other large parcels of land, including Carstens’ Ranch on Iron Springs Mesa. He was passionate about the Telluride region and made conscientious decisions to minimize development as much as possible and strove to preserve the natural beauty of the area.

Carstens’ philanthropic spirit and generosity was as large and expansive as the parcels of land he owned in San Miguel County. His philanthropy extended from San Diego to Telluride to Phoenix, his most recent place of residence. A champion of youth, he and his wife Debbie created the San Miguel Kids Endowment to fund organizations that benefit children in the Telluride, Norwood and West End school districts; established the Just For Kids Fund Foundation in 2001, which helps children in San Miguel County; started an annual college scholarship program; founded the Underdog (an after school program); and helped start the One to One Mentoring Program. Due to his support of the American Field Services, Telluride boasts the largest number of high school students per capita that study abroad.

Carstens was also a major contributor to the Telluride Foundation and served on its Board of Directors. In addition, he supported a myriad of other organizations including the Telluride Jazz Celebration, Mountainfilm Festival and the Wine Festival. His true passion was giving back to others and to his community.

Born in Denver in 1931 and raised for the majority of his life in southern California, Carstens moved to San Diego after serving in the U.S. Marine Corps for three and one-half years. He earned a bachelor’s degree in commerce and finance from Occidental College and a law degree from the University of Southern California. Carstens practiced law until 1970. At that time, he became increasingly interested in the real estate development work of his clients and left law to focus on the development of industrial parks in San Diego and Phoenix. 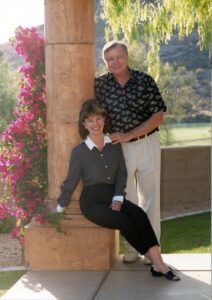 I frequently say “Bill Carstens, you taught me how to give.”  You also gave me the means to do so. Establishing a fund at Arizona Community Foundation created the vehicle to finance a multitude of worthy non-profits. It started with AFS (American Field Service) and spread broadly from there. – Deb Carstens